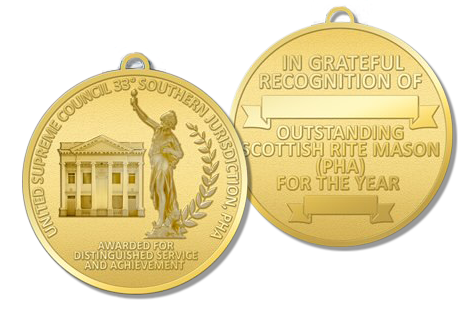 The Gold Medal of Achievement

In 1949, SGC Allen stated, “I was very much impressed with the Gold Medal [of] Achievement Award which the Northern Supreme Council presents yearly to its selected recipient in recognition of meritorious service.” He continued, “I am recommending that our Supreme Council adopt this noteworthy feature of our sister jurisdiction.”

The recipient would be chosen for their Distinguished Service & Achievement in contributions to Prince Hall Freemasonry, to his fellow man, his country or to the United States of America. Although the Gold Medal was instituted in 1949, it was not until 1956 that it was first awarded to Ill. Paul R. Williams.

As for the design, on the obverse or front side of the Medal, appears a sculptured picture of the Cathedral, together with a Roman Goddess, offering up a garland of laurel. The setting symbolizes the conquest over adversity by the Supreme Council. The garland of laurel is emblematic of civic achievement, recognized in old Rome by its bestowal upon those whose distinction in public service merited the highest esteem of the people.

Around the border, beside the name of the Supreme Council are the words “Awarded for Distinguished Service and Achievement.” On the reverse side there is a place for the Honoree’s name and date of presentation.

The anterior face of the Gold Medal is adorned with the words “United Supreme Council, 33°, Southern Jurisdiction, PHA”, encompassing the edge of the medal. On the sinister of the medal is a raised relief of the Cathedral of the United Supreme Council. On the dexter of the medal is an image of Andromeda, the Ethiopian Princess of Greek mythology whose beauty was renowned. She is captured holding in her right hand the Promethean torch which symbolizes the deity’s gift of knowledge, science and culture to mankind. Within her left hand, she holds the sprig of laurel that she has gathered from a laurel branch behind her which symbolizes the unrequited love of man to do good towards his fellow man, even if that love is not returned. Adorning the nethermost portion of the medal are the words, “Awarded for Distinguished Service and Achievement”.

On the posterior face of the Gold Medal are the words, “In recognition of” with a space for the Honoree’s name, followed by the words “Outstanding Scottish Rite Mason, PHA, for the year” with a space for year the medal is awarded.

Awardees: (Italics denote recipients of the Gold Medal from the USC-Northern Jurisdiction)